Find a Location Near You 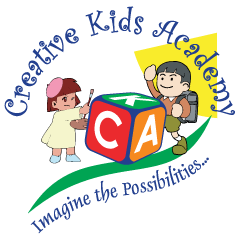 How and why language is important for early learning:

Give your child a leg up in the academic world by starting early! According to Therese Caccavale, President of the National Network for Early Language

Creative Kids Academy offers Spanish every week at all of our locations. Through songs, storybooks, hand games, and puppets, the children are invited to engage in a new language in a fun way.

Here is a typical Spanish lesson:

We begin by singing our greeting song “Buenos días.” Then, since in the previous lesson we discussed emotions, we all act out the Spanish words they have learned for happy, sad, angry, tired, scared. Then the teacher reads a board book about the body in English and Spanish. After that, the children learn to sing “Cabeza, hombros, piernas, pies,” which is the Spanish version of “Head, Shoulders Knees and Toes.” (In Spanish, instead of “knees and toes,” they sing “legs and feet.”) We play some hand games, including “Dónde están mis manos” (Where are my hands) and “Dos manitas, diez deditos” (Two little hands, ten little fingers). Finally, the teacher performs a little story in Spanish and English on a felt board that incorporates and repeats the old and new vocabulary many times. In this lesson, it’s a story about some barnyard animals and a spider who argue about who has more legs, more eyes, etc. We finish up by singing our closing song “Ya nos vamos.”

Feel free to Contact Us to learn more about our enrichment programs or to take a tour of one of our centers.